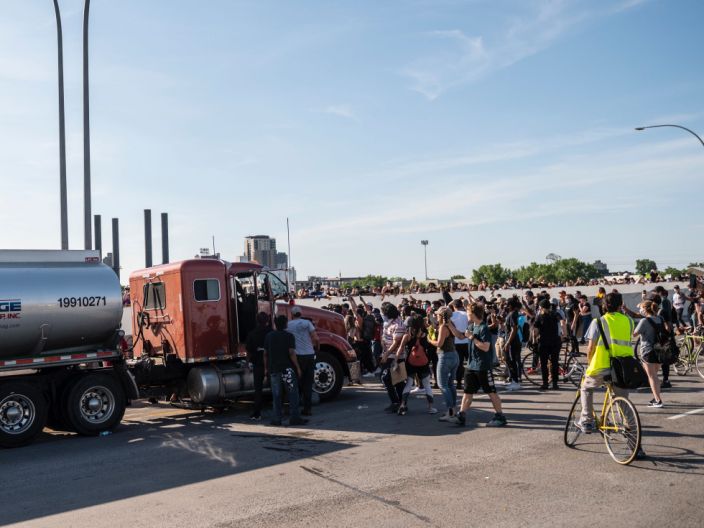 Protests have sprung up across all 50 states and around the world. As of now, this is the largest equal rights movement in the world. While many are taking to the streets to uphold equal rights, many are also finding their ways into unsafe circumstances. Many have moved to public highways and are blocking traffic.

For truck drivers, this creates an issue. While many drivers are supportive of the cause, having a highway blocked can lead to disaster.

The case of Bogdan Vechirko, a truck driver, an instance where both Protesters and negligent driving had the potential to cost lives.

Bogdan Vechirko was driving his semi through Minneapolis when he came upon a crowd of protesters. Instead of taking the proper precautions to avoid the protesters, it is apparent that he was not slowing down. Until the last second Vechirko slammed his breaks and slowed down. Fortunately, nobody was killed or injured in the process.

Angry protesters then swarmed his truck, pulled him out and attacked him.

Truck Drivers Can Use Their Truck To Run Down Protests.

The issue causes many to question the morality of the issue. For Americas 2-million truck drivers, they have been overexerted, fighting on the front lines of COVID-19 with limited supplies. While many have found their way through the protests, other have not.

Truck drivers are legally able to run through protesters if they are in danger. This is a double edged sword as many drivers have the freedom to pull the same stunts as Vechirko. Self defense is a platform that awards many the right to do hurtful things, although it is still their right to fully protest themselves when endangered.

Staite, who has been vocal about the issue has promoted the well-being of safety for both protesters and drivers. Unfortunately, his messages have been picked up by right-wing media to enforce violence and cause a greater divide.

“We will defend ourselves every time, up to and including, using our 80,000-pound trucks and its 1,800 foot-pounds of torque to run you over,” he wrote. “We don’t want to, but will if we have to, to save our own life.”