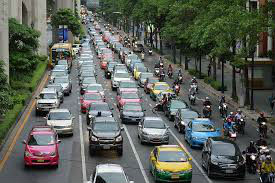 It’s finally come to this. Yes, the congestion in New York City has become so overwhelming that lawmakers are turning to drastic measures. Beginning soon, motorists who enter the city will be charged a toll. That’s right, there are no free rides anymore.

This kind of plan has been effective in other big cities like London and Singapore. Now New York City hopes this congestion pricing will ultimately decrease the traffic in the City that Never Sleeps.

But the plan isn’t merely intended to reduce traffic, the money gained will be used directly to improve Big Apple subways and buses. One New Yorker remarked, “I think it’s a good idea. Every day it’s very bad traffic, so I think it can be better.”

Here’s how the plan lays out. Motorists below 60th street will be charged a toll, when entering Manhattan. This toll will result in more than a billion dollar windfall which will go to the city’s antiquated transit system.

The surcharges haven’t been exactly determined yet, but the guess is that drivers in cars will pay about $11.50 and truck drivers roughly $25.

Long Island resident Ed Crescimanna said, “I work in Manhattan a lot and I don’t mind paying for it to get in there and if it helps congestion, even better.”

Not everybody agrees the toll is fair. Charles Alvarez who regularly visits his mother in a Queens nursing home said, “That’s crazy. I can’t imagine doing that. But I have to see my mother, and it’s something that would greatly impact me.”

According to traffic experts, the system will make a significant impact. They believe that a world class city deserves better than traffic that moves at 4.7 miles per hour. They strongly believe that this new toll will vastly improve the situation.

Best Audiobooks To Listen To On The Road