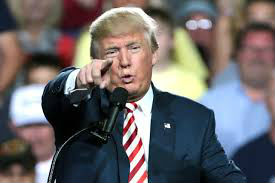 LONG ISLAND, NY – A sixth-grader was instructed by her teacher that she couldn’t select Donald Trump to be the hero for a class project. Bella Moscato says her teacher at Samoset Middle School did not approve of her liking the President and definitely didn’t want him labeled a ‘hero.’ In fact, the teacher allegedly went on to disparage the President in front of the entire class.

The youngster told Long Island’s Channel 12, “Donald Trump is my hero.” She added, “The teacher said I wasn’t allowed to do Donald Trump because he spreads negativity and says bad things about women.”

Bella Moscato’s parents, Arthur and Valerie, are asking that the teacher and the school apologize to their daughter. In fact, they claim that what the teacher did essentially constitutes intimidation and censorship.

Bella went on to say that she didn’t understand why the teacher was fine with somebody doing Barack Obama, but not okay with Donald Trump. According to the girl, this is what got her extra mad.

School board officials are downplaying the incident. In fact, they put out a statement reading, “To the best of our knowledge, by choice the student is still conducting their project of President Trump.”

Bella’s parents said the girl had been a fan of the President’s since she was eight years old. Furthermore, she even dressed up as Trump for a class project. In fact, Bella’s father was particularly outraged by the incident. “I can’t believe that anybody in the school would tell her that Trump can’t be her hero. No one should make a child feel that way, and you’re supposed to protect my child.”

According to Sachem Central School District’s superintendent, the district does not encourage or allow any prohibitions on a student’s choice of the President as the subject for a ‘hero’ project.