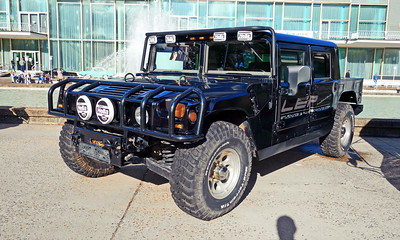 The Hummer EV was a surprise to many during the Superbowl. The event hosted a plethora of “big announcements” but the one that stood out the most for us was the new Hummer ad starring Lebron James. With ads for a new James Bond, Kia’s “Smaht Pahk” and now a new and competitive electric truck on the market, is Hummer ready to get back in the game?

When the all-terrain transport vehicle was developed by the Germans in the early ’90s, the oil craze was strong. SUV’s were making big headway and they came with all the gas-guzzling components that many consumers didn’t mind. Then, came the gas price surge of the early 2000s. When that came the auto-industry took a huge slam, but still, many people still purchased the Hummer and its predecessors. The United States government fully utilized the Hummer program within its military. Quickly becoming a staple in infantry units.

The Hummer Phases Out

Back before the Hummer EV was even a thought, the concept of “electric cars” was still new and “experimental”. This undoubtfully gave the massive vehicles from GMC reign supreme. Unfortunately, like the 70’s oil embargo before it, many consumers moved away from a gas-hog SUV to more practical energy saving cars. It was extremely interesting to see this behemoth of a vehicle knocked out of the industry by a Prius.

Once Elon Musk and his over-the-top future projects came around, many automotive manufacturers shifted gears. With the introduction of the Tesla vehicle line, came the influx of more innovative electric vehicles. The company and its founder had put the patent for electric cars on the free market. This was a huge power move that allowed all automotive manufacturers to develop their own future electric strategies.

When Tesla revealed their “Cybertruck” a couple of months back, the world was taken by the concept. It showed how far the electric automotive industry had come. With videos depicting the Cybertruck in a tug-of-war with an F-150 and smoking it, the world got its first glimpse as to what it could do. Well, with the free market for electric vehicles, GMC decided that now was the time to unveil a completely redesigned Hummer. The Hummer EV is a pickup truck that is completely electric and is designed for the times ahead. While most people were scared off from the gas-guzzling functions of the H1, H2, and H3, the new EV series promotes much more energy focused vehicle with the same horsepower capacity.

The new GMC Hummer EV series will debut in 2022. Unfortunately, not much has been released in regards to the capabilities of the truck. That being said, we know that it’s going to pull out all the stops. An SUV with that reputation has to live up to its predecessors in terms of what it can do and we have full confidence that it will perform.